TORONTO, Canada—The next few days are expected to bring laurel to the Sikh community as the NDP leader Jagmeet Singh is likely to emerge as a kingmaker in the Canadian politics by tendering support to Justin Trudeau led Liberals to form a minority government. 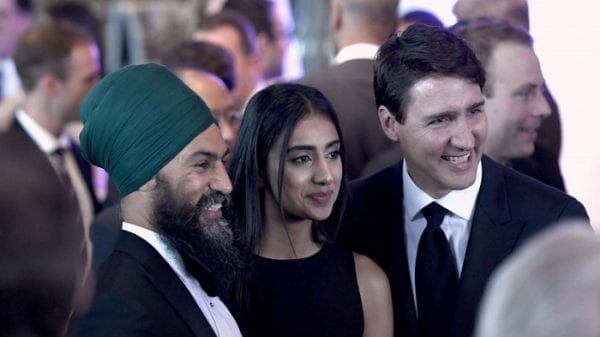 Notably, the Liberal party has bagged 157 seats while the NDP has won 24 seats due to which the duo parties are expected to join each other to form a Liberal Party-led minority government in the 338-seat House of Commons by fulfilling the condition of 170 members.

In this general election, the conservatives won 121 seats while the Bloc Quebecois, Green Party won 32 and 4 seats respectively. One seat has been bagged by an independent candidate.

Bloc Quebecois leader Yves-Francois Blanchet has apparently signaled at his unwillingness to join the government. Also, the Green Party has indicated to remain in the Opposition with its leader Elizabeth May saying that her party would work hard to hold the government to account by non-stop arm-twisting.

“The New Democratic Party is poised to play kingmaker in a minority parliament after Jagmeet Singh spearheaded a turnaround on the federal campaign trail that may have saved his leadership and pulled his party from the brink of irrelevance,” the Toronto Star newspaper reported.

It is pertinent to note here that the NDP has faced a big drop in its seats as compared to the last general polls. In 2015, the NDP had bagged 44 seats and had emerged as a third largest party in the House of Commons in Canada while this time the NDP has been demoted by one position.

In his celebratory speech, Jagmeet Singh said that his party will now be working hard to deliver on the priorities that Canadians have.

“When we get back to Ottawa, every single day we are in parliament, New Democrats are going to be working to make sure Canadians’ lives are better,” he was quoted as saying by globalnews.ca.

“The winner of this election is not a leader or a party — the winners should be Canadians. They want a government that works for them. Not the rich and the powerful,” Jagmeet Singh tweeted.