TORONTO, Ontario, Canada—It’s a nightmare situation for Justin Trudeau and the Liberals — the Bloc and NDP are rising and taking support straight from his camp.

The latest poll conducted for the Sun as part of the DART Maru/Blue Voice Canada Poll shows the Conservatives sitting at 33% support nationally, the Liberals dropping to 28% and the NDP rising to 20%. 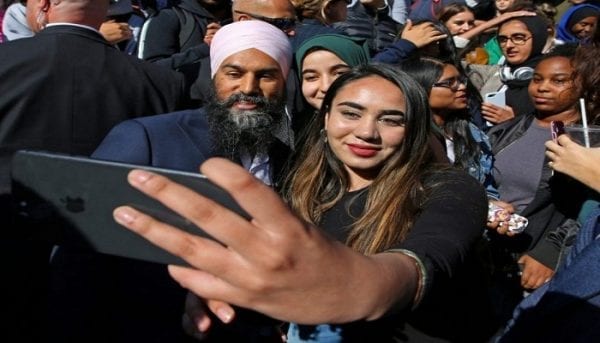 Pollster John Wright, partner at DART, notes his is the second poll in the last 48 hours that shows the Liberals dropping below the 30% floor. A previous DART poll showed that just 25% of voters believe the Trudeau Liberals deserve re-election — now those voters that had parked their votes with Trudeau are looking at other options.

“The Liberals now have a multi-front war on their hands for voters,” Wright said.

One front is in Quebec where the Bloc has 35% pulling mostly from the Liberals but also from the Conservatives. In the rest of the country, Trudeau is losing support to a rising NDP under Jagmeet Singh.

The NDP leader’s personal approval rating has been going up over the past couple of weeks but his party’s support numbers had not changed. Wright notes that his poll has the NDP up 5 points since his September 20th numbers were released.

“The findings suggest that previously committed Liberals are likely bleeding to his camp,” Wright said.

The timing couldn’t be worse for the Liberals. The election campaign has just 10 days left to go and many Canadians won’t be paying attention to newscasts over the Thanksgiving weekend but they will be talking politics over turkey.

Trying to turn this around so late in the campaign will be difficult, especially if impressions solidify over the weekend.

The Conservative vote hasn’t changed over the past few weeks but they aren’t yet within striking distance of a majority government. However, if these numbers hold they would undoubtedly win the most seats in a minority Parliament.

Andrew Scheer’s party has seen a jump in British Columbia, which could result in a bump in seats. The Conservatives are now at 38% support in B.C., up from 32% in September. The Liberals have fallen five points to 24% and the NDP sit unchanged at 22%.

British Columbia is the place where the Greens could have their best showing. The party currently has two MPs in that province and is sitting at 13% support.

Ontario has been seen as the big prize and the Conservatives, currently at 33%, and Liberals, sitting at 32%, are effectively tied there. The NDP becomes the wild card here as they show a 7 point increase to 18% support.

If the NDP momentum keeps up, the party could not only keep their 8 seats in Ontario but even take some from the Liberals — in particular in Toronto.

This poll comes after a survey by Angus Reid showed similar numbers for the parties and after a poll from Campaign Research showed Singh’s leadership approval skyrocketing to 49%, well above all other party leaders.

This campaign has been a battle between the Liberals and Conservatives with neither party able to break out and take a commanding lead. We still don’t have anyone capable of forming a majority government, but the NDP is making the race interesting.

Expect the Liberals to launch a campaign of fear that will tell NDP voters that unless they vote Liberal, they will elect a Conservative government. Such lines have worked in the past but with so many progressive voters disappointed in Justin Trudeau, it’s doubtful that tactic will work this time.

The survey was undertaken via 1,310 randomly selected Canadian adults who are members of Maru/Blue’s Voice Canada Online panel on Oct. 9, 2019 and is considered accurate to within +/- 3.1 percentage points.