NEW DELHI, India—In a major setback to more than 8000 families who lost their loved ones in fake encounters carried out by the Punjab police, the Supreme Court of India today refused to take up the petition seeking the identification of over 8,000 missing persons during the period of militancy starting from 1984. 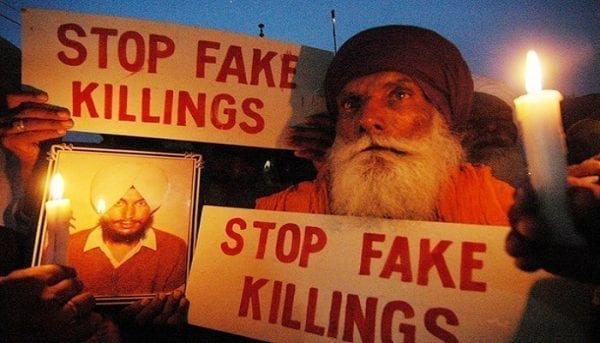 The PIL pertains to the enforced disappearances, extra-judicial killings, and mass cremations of over 8,000 persons who were either killed using extra-judicial means or abducted by security forces in Punjab during the period post 1984.

It is pertinent to note here that the PDAP has conducted a decade long investigation to identify victims of extra-judicial killings in 14 districts of Punjab. During this investigation, the PDAP identified 8257 victims who disappeared after being picked up by cops between 1984 and 1995.

PDAP member Advocate Satnam Singh Bains had informed that proper evidences were also enclosed with this PIL moved in the Supreme Court. “Not only Sikhs, but the families of other communities have been also covered who lost their loved ones in fake encounters,” he added.

“For the past three decades, the victim families were struggling for justice and accountability,” he said while adding that the PDAP uncovered compelling evidence of 6,140 illegal cremations by the Punjab police.

It also provided evidence of 1,400 encounter FIRs claiming that the victims were unidentified militants.