Jammu And Kashmir In Chaos As India Strips Its Statehood 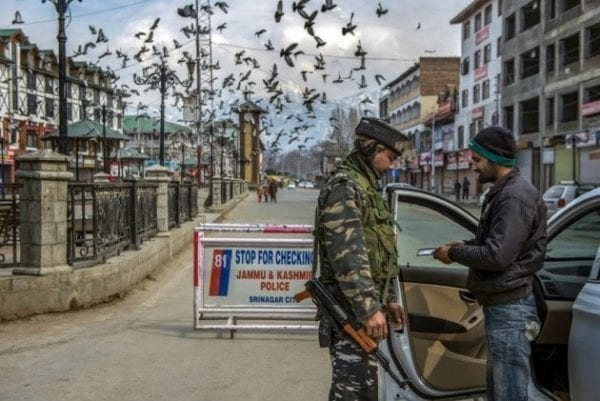 A proverbial darkness hangs over the region as it remains cut off from the outside world. India has moved 46,000 troops into J&K in the last two weeks alone. Residents have been under curfew since August 4. A handful of videos obtained by Western media show deserted streets covered in barbed wire and patrolled by heavily-armed soldiers. The few reports emerging from Kashmiris indicate they are starving as supermarket shelves lie bare and ATMs are empty.

“Kashmiris have been forbidden from choosing their own future for over 400 years,” remarks Arvin Valmuci, a spokesperson for Organization for Minorities of India. “Since 1947, they had some autonomy under Article 370 of India’s constitution. In the space of two days, without any discussion or warning, the Hindu nationalist regime in Delhi rammed through a bill that obliterated the 70-year deal under which J&K agreed to join the Republic of India.”

Article 370, adopted in 1949, permitted J&K to handle its own affairs with the exception of matters relating to defense, foreign affairs, and communications. The article was based on stipulations laid down in the 1947 Instrument of Accession agreed to by J&K’s last ruler. Kashmiris generally considered the article as the primary legal justification for their state’s alignment with India. After it was revoked, former J&K Chief Minister Mehbooba Mufti stated, “This constitutional relationship has been turned into an illegal occupation.” She is now under arrest.

Following the BJP’s actions, J&K’s autonomy and statehood have been revoked. The region is partitioned into two territories: Ladakh and a reorganized J&K. Both territories will be subject to direct rule by Delhi.

“What we are now witnessing in Indian-administered Kashmir takes what was already a bit of pattern to a whole new level,” said a spokesperson for the Office of the United Nations High Commissioner for Human Rights on August 7. “I would refer you back to our 8 July 2019 report on the human rights situation in Kashmir, which documented how authorities in Indian-administered Kashmir have repeatedly blocked telecommunications networks to muzzle dissent, used arbitrary detention to punish political dissidents and employed excessive force while dealing with protests, leading to extrajudicial killings and serious injuries.”

The US State Department’s Bureau of South and Central Asian Affairs reported that the US government was not informed prior to Delhi’s shocking move. “The US is closely following India’s legislation regarding the new territorial status and governance of Jammu and Kashmir,” said a State Department spokesperson. “We note the broader implications of these developments, including the potential for increased instability in the region. The US calls for calm and restraint by all parties.” The spokesperson also urged “respect for individual rights.”

UK Foreign Secretary Dominic Raab said he was in talks with India’s foreign minster, commenting, “We’ve expressed some of our concerns around the situation.” In Canada, the New Democratic Party said it was “deeply concerned by reports of the Indian government’s crackdown in recent days in Kashmir.” The NDP warned, “We are troubled by such actions, which provide fertile ground for more human rights abuses in a region where the people of Kashmir regularly suffer abuses such as excessive force, arbitrary detention and the lack of due process, and communications blackouts.”

“The Indian Government’s revocation of the autonomy and special status of Jammu and Kashmir violates the rights of representation and participation guaranteed to the people of Jammu and Kashmir under the Indian Constitution and in international law and is a blow to the rule of law and human rights in the state and in India,” stated the International Commission of Jurists, a human rights NGO based in Geneva, Switzerland.

In a statement, the Indian American Muslim Council noted that the BJP’s action “lends credence to the fears of India’s 180 million Muslims that Mr. Modi’s rightwing administration has a vile agenda to victimize and brutalize them in fulfillment of the long-held vision of Hindu supremacists to convert India into a Hindu nation.”

The full region of J&K is split into three sections controlled by India, Pakistan, and China. About two-thirds is administered by India, which has fought three wars with Pakistan for control of the region.

Both India and China have sharply contested India’s latest actions.

Pakistan responded by expelling India’s ambassador and suspending its already limited trade relations. In an August 5 statement, the Pakistani foreign ministry said, “The Indian Occupied Jammu & Kashmir is an internationally recognized disputed territory. No unilateral step by the Government of India can change this disputed status.” China echoed that sentiment. “It is an international consensus that the Kashmir issue is an issue left from the past between India and Pakistan,” said Chinese foreign ministry spokesperson Hua Chunying on August 6. On August 7, China’s ambassador to Pakistan called J&K an “internationally recognized disputed territory.”

“The BJP’s devil-may-care actions, taken without any consideration for international opinion let alone the well-being of Kashmiris, places the Indian subcontinent in a very precarious position,” says OFMI’s Valmuci. “Wherever the Hindutva ideologues take power, they use the harshest dictatorial methods without mercy. This totalitarian and arrogant action is purely anti-democratic. The Rashtriya Swayamsevak Sangh, which is guilty of so many direct and indirect attempts to ethnically cleanse India of non-Hindus, is the architect of this assault on the rights and very lives of Kashmiris. We only hope that war will be averted.”