CHANDIGARH, Punjab—Rejecting the CBI’s closure report in sacrilege cases, the Shiromani Akali Dal has announced to challenge the CBI’s move and make efforts legally, constitutionally and politically to get the investigation reopened by the CBI till its logical conclusion. The move came in a core committee’s meet of SAD on July 16 which was chaired by SAD president Sukhbir Badal. 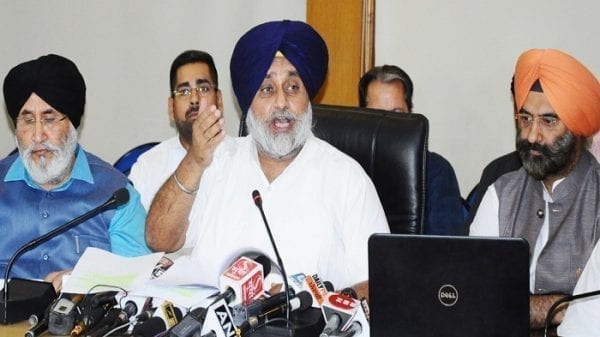 Sharing the details of meeting’s proceedings, party spokesperson Harcharan Singh Bains informed that a delegation of SAD leaders will meet the Union Home Minister Amit Shah to request him to intervene in the matter and get the probe reopened by the CBI. “The delegation will seek immediate and urgent steps to get the probe completed are taken as a priority so that the culprits of this despicable crime were booked and severely punished,” he added.

Bains further said that the SAD will also deploy a team of legal experts to pursue the matter in a court of law to ensure that the deep conspiracy behind the painful chain of events pertaining to the tragic and grievous acts of sacrilege was fully exposed and the hit men and their bosses and conspirators were given punishment that should serve as exemplary deterrents for future culprits.

It may be recalled here that the Central Bureau of Investigation (CBI) had filed a closure report in sacrilege cases on July 4 in three cases pertaining to the sacrilege of Sri Guru Granth Sahib Ji. This report was filed by the CBI’s ASP P. Chakraborty, who was the Investigating Officer in these cases, in the special CBI court of judicial magistrate G.S Sekhon.

The investigation of these sacrilege cases was given to the CBI by the former SAD led Punjab government on October 26, 2015. These three cases pertained to the theft of a holy saroop of Sri Guru Granth Sahib Ji from village Burj Jawahar Singh in June-2015, pasting of provocative posters in Bargari and committing sacrilege by scattering the sacred Angs of Sri Guru Granth Sahib Ji in Bargari.

It is noteworthy here that the Congress led Punjab government had even passed a resolution on August 28 last year to take back the investigation of these cases from the CBI, but the CBI didn’t pay any attention to the Punjab government’s request in this concern.