CHANDIGARH, Punjab—Terming the sedition law as anachronistic, the Dal Khalsa has strongly criticized the Indian Government for refusing to scrap it despite its widespread misuse and abuse. 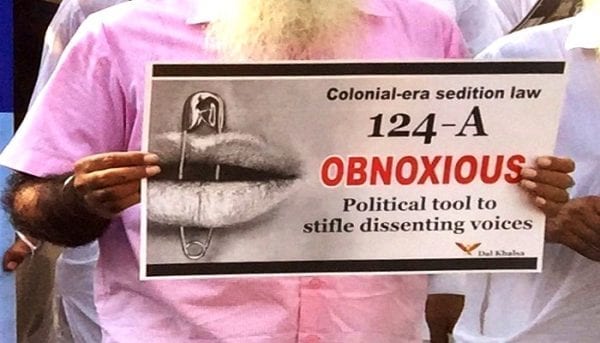 Notably, the minister of state for Home Nityanand Rai in an answer to Parliament on July 4 has stated that section 124-A (sedition law) won’t be scrapped as it is still needed to combat secessionist elements. The former Home Minister Rajnath Singh had also during the electioneering campaign whipped up this point and had said that, “the new BJP government will make the sedition laws more stringent.”

Describing it as highly objectionable and obnoxious, party head Advocate H S Cheema said it’s a tool in the hands of authorities for harassment and to stifle dissenting voices.

It’s a matter of shame that India has failed to scrap the colonial-era law so far whereas Britain and many other countries have abolished their sedition laws long back.

He said all pleas to do away with this archaic law by human rights organizations, civil rights groups and Amnesty International, have fallen on deaf ears. Instead of joining ranks with those countries who have abolished this draconian law, the Modi dispensation has shown its adamant attitude to retain it.

He said in the recent past, provincial Govt’s in J&K, Punjab, Meghalaya, Assam, Haryana, Delhi , MP, Karnataka and many other states have misused and abused the provisions of this anti-people law to silence voices of dissenters and political adversaries.