OTTAWA, Canada—In just 13 weeks, Jagmeet Singh’s campaign for the NDP leadership has gained some epic momentum. The campaign has signed up over 47,000 new members for the NDP, helping triple the party’s membership and laying the groundwork for the run for Canada’s parliament in the general elections of 2019.

He is gaining more and more endorsements from fellow MPs across Canada’s provinces, surprisingly including the MP for Quebec, a province that usually refrains from mixing religious wear from politics like the plague. Quebec’s MP couldn’t deny that Jagmeet Singh’s values and principles couldn’t be ignored.

With only two months to go for the party leadership elections, a win would then give the NDP a real chance to contest the national elections two years from now. 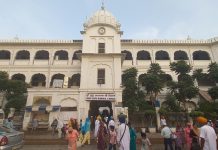 Op/Ed: Why is the SGPC not taking centuries-old structures found at Sri Darbar Sahib seriously?