the government made it legal

they tried to make Sikhs no more

to try to end a people.

had its cities look like a giant bloody puddle

the government’s only skill is hypocrisy

under homes burnt down to rubble.

It was not a riot.

This was a genocide.

While the police are standing in a daze curbside,

Sikhs’ human rights were set aside to be denied.

The open roads stream with blood as it spatters

as they sit back and sip their scotch,

and watch the nautch girls nautch.

No justice has been served

“Sikhs got what they deserved”

Such a horrifying fallacy,

No one deserves that kind of brutality.

Attackers and police are allied,

saying their actions are justified.

to expose the truth,

to bare the proof, cause there’s no shortness of its routh.

They thought they could silence our roar

but don’t they know

one day we will overthrow,

the corruption that doesn’t let my people grow.

Will be no more.

The end of our marginalization.

When the lions roar,

they tremble the floor. 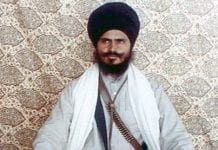 [Poem] Shaheed Gurbachan Singh Manochahal: My Friends Will Be Waiting 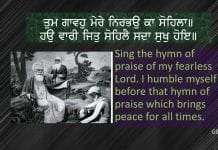 A Hymn Of Peace And Joy!