Sardar Baghel Singh (c. 1730 – c. 1802) was an important military general during turbulent times in Punjab in the 18th century. He was born in the village of Chabal Kalan in the Taran Taran district. He grew up to become leader of the Karor Singhia Sikh fighting order or misl. From humble beginnings, he arose to become a formidable force in Sutlej to Yamuna area. He aligned himself with Karor Singhia misl led by Sardar Karora Singh and succeeded as a leader of Karora Singhia misl in 1765 after early demise of Karora Singh. Karora Singhia misl had 12,000 fighting men according to Syed Ahmad Latif, a Muslim historian.

As well as being a good soldier, Baghel Singh was a very good political negotiator and was able to win over many adversaries to his side. The Mughals, the Ruhilas, the Marathas, and the British sought his friendship. In the wake of the decay of Mughal authority in the Punjab owing to Ahmad Shah Durrani’s successive invasions during the latter half of the 18th century, the Sikhs began extending their influence.

Baghel Singh’s Karor Singhia Misl fought directly with Ahmad Shah Durrani (also known as Abdali), along with other Dal Khalsa misls near Kup at Malerkotla, where in one day of battle alone 30,000-40,000 women, children, and old Sikhs were killed.

After Durrani’s invasion, Sikhs started consolidating the territories between Yamuna and Indus by incorporating into misls, and misls reporting to Jassa Singh Ahluwalia (Chief of Dal Khalsa) won territory at Akal Takht Amritsar.

When Sukarchakia Misl (of Maharaja Ranjit Singh) won the territory of Gujranwala, and the areas of Ravi and Chenab Doab and Ramgarhia Misl won the areas of Amritsar, Gurdaspur, Bhangi around Lahore, and Kasur, Karor Singhia Misl declared their ownership of territories now including Ambala, Karnal, Hissar, Rohtak, Chandigarh, etc. Baghel Singh took possession of portions of the Jalandhar Doab and established himself at Hariana, near Hoshiarpur. Soon after the Sikh conquest of Sirhind in 1764, he extended his rule beyond Karnal and occupied number of villages including Chhalaudi, which he later made his headquarters.

In February 1764, a body of 30,000 Sikhs under the command of Baghel Singh (Named Tes Hazari / Tis Hazari (30000) after his attack) and other leading warriors crossed the Yamuna and captured Saharanpur. They overran the territory of Najib ud-Daulah, the Ruhila chief, acquiring from him a tribute of eleven lakh of rupees (

1,100,000). In April 1775, Baghel Singh with two other sardars (Rai Singh Bhangi and Tara Singh Ghaiba) crossed the Yamuna to occupy that country, which was then ruled by Zabita Khan, who was the son and successor of Najib ud-Daulah. Zabita Khan in desperation offered Baghel Singh large sums of money and proposed an alliance to jointly plunder the crown lands.

Sardar Baghel Singh set up an octroi-post near Sabzi Mandi to collect the tax on the goods imported into the city to finance the search and the construction of the Sikh Temples. (He did not want to use the cash received from the Government Treasury for this purpose, and most of that was handed out to the needy and poor. He often distributed sweetmeats bought out of this government gift to the congregationalists at the place which is now known as the Pul Mithai.) In March 1776, they defeated the imperial forces of Mughal emperor, Shah Alam II near Muzaffarnagar. The whole of the Yamuna Gangetic Doab was now at their mercy.

In 1778, the Mughal emperor Shah Alam II sent an estimated army of 100,000 soldiers to chastise the Sikhs. The Mughal force was commanded by the wazir Nawab Majad ud Daula under the banner of the crown prince. In addition to being a brave warrior, Baghel Singh was a sharp strategist and statesman. He was able to out-manoeuvre the strong Mughal army in the battle of Ghanaur, near Patiala city. As a result of the victory, the huge Mughal army surrendered before Baghel Singh’s forces.

However, the Sikhs remained a source of trouble for the Mughal Kingdom throughout the late 18th century. Baghel Singh led the Sikhs all the way to Delhi and in 1783 plundered the imperial capital, a move that alarmed the British as well as the Marhattas. The 1783 plunder of Delhi under the army of Ghulam Qadir (the leader of the Indian Afghans) announced to the world that the Sikhs had arrived.

Despite the treaty with the Marathas, the same Sikhs of Malwa very quickly joined the British in the second Anglo Maratha war of 1803-1805.[1]

Baghel Singh and the Mughal Emperor entered into an agreement that 12.5% of the octroi of Delhi would be regularly sent to him. In return, he would ensure that the Sikhs did not attack the capital again.

Baba Baghel Singh is credited with establishment of following Gurdwaras or Sikh Temples in Delhi:

Baba Baghel Singh died around 1802 at Hariana, near Hoshiarpur. His descendants now reside in Ahmedgharh, Punjab. 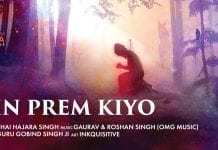