Within the deeply informative and thought-provoking live recording, Baba Ranjit Singh Khalsa Dhadrianwale discusses what ‘Bhagti’ is whilst speaking to the thousands who attended a Panthik Diwaan on 20th September 2014, organised by the Parmeshar Dwar Gurmat Parchar Mission in the Doaba region of Punjab within Jalandhar city’s Kartarpur town.

After doing ‘Vaheguru Simran’ with the Sangat present, a fundamental part of a Sikhs life, they explain with Gurmat justification that one form of ‘Bhagti’ is the truth (“Sach”). First Sikhs must hear the truth, then they must understand the truth and finally they should preach the truth. This is the beautiful concept in Sikh logic that is applicable to all of mankind. They explained that if they were to simply meditate on stage, no person would come into conflict with them. However, when the truth is spoken then certain people will enter into conflict, whether it be drug dealers, snake worshippers or those agencies working against the Khalsa Panth.

They urged Sikhs to not fear what others may think as the person who looks at others is known as a “Moorakh.” As it is better for our body to stay hungry but not eat the wrong food, in the same way we must only feed our inner-being with truthful, right knowledge.

If the wise Guru Nanak Dev Ji sat in Kartarpur meditating without propagating the truth, no person would have confronted them. In the same way Kalgidhar Guru Gobind Singh Ji could have kept quiet on the issue of castes, equality and authoritative power misuse and they could easily have lived a comfortable life in Anandpur, but instead they became a voice against injustice and propagated the truth. The world does not favour the Bhagti of speaking the truth. Those who understand the nations difficulties as their own, speak up for human rights and challenge corruption, they will always be targeted.

Baba Ranjit Singh Khalsa talked about the simple and just demands raised in the 1980’s Anandpur Sahib Resolution and the truth that was spoken by the Sikh nations saint soldier Sant Jarnail Singh Ji Khalsa Bhindranwale, where others afraid of the truth became traitors of the Khalsa Panth. Sant Jarnail Singh Ji Khalsa Bhindranwale challenged the system, spoke against injustices and ultimately propagated the truth, hence the reason they became a target of army’s and tanks. 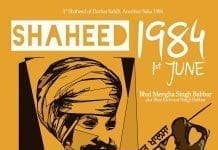