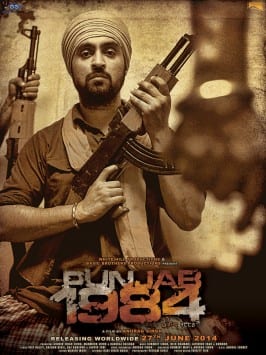 SYDNEY, Australia—Diljit Dosanjh’s recently released Punjab 1984 film has been greeted with mixed reactions.  Social networks have been filled by comments appreciating his work, while on the other hand, a number of organisations in Punjab and worldwide have demanded a complete boycott.  Many have also dubbed the film as a negative portrayal of the Sikh Freedom movement after 1984.

Namely, scenes showing freedom fighters killing Hindus on a bus, and quarreling over minute arguments, have been condemned.  The movie also shows some fighters as consuming alcohol.

Sikhs saw the Central Board of Film Certification (CBFC), or Indian Censor Board, ban Sadda Haq and Kaum De Heere, however Punjab 1984 faced no such challenges in Punjab.  There were no requests by the CBFC to remove any scenes from the movie, while it had demanded that Kuljinder Sidhu remove a bulk of scenes before Sadda Haq was finally released in India.

Diljit Dosanjh had faced anger from people for advertising for Shiromani Akali Dal (B) in the recently contested Lok Sabha elections.  It has been claimed by various web portals that perhaps Dosanjh produced this movie to undermine the Sikh Freedom movement.  Dosanjh is also notorious for singing immodest songs.

An in-depth review of the movie is available here.