Home Articles Pictorial: Gurudwara Janam Asthan Sri Nankana Sahib
Facebook
Twitter
Pinterest
WhatsApp
Nankana Sahib is a holy place where the founder of Sikh religion, the dispeller of darkness, the most enlightened global Guru, Guru Nanak Dev ji was born early in the morning to Mata Tripta Ji and Mehta Kalu Ji on 15th April, 1469 (Baisakh sudi 3, Samwat 1526).
Bhai Gurdas ji in his Var (Var 1/27) has equated this event with the sun that lights up the earth after a dark night.
According to Janam Sakhis, when Daulta Dai, the maid nurse was offered money, she refused it on the plea that she had already been rewarded by the very glimpse of the holy baby. Shiri Guru Nanak Dev ji gave his first message that he belong to God and would exert the people to worship His Name. Bhai Nand lal ji has well said that Shiri Guru Nanak Dev ji was asked by the Almighty to turn the face of humanity towards Him.
The township of Nankana Sahib was earlier known as Raipur and later on as Rai-Bhoi-di-Talwandi. After the birth of Shiri Guru Nanak Dev ji, it began to be known as Nankian Sahib/Nankana Sahib. It is situated at a distance 48 miles on the west from Lahore Pakistan. Shiri Guru Nanak Dev ji passed his whole childhood and young age in Nankana Sahib.

At present their are about 70-80 Sikh families residing in Nankana Sahib and as a result of this, daily services are performed and Bani is recited. At the occasion of Shri Guru Nanak Dev ji’s anniversary, Thousands of Sikhs devotees from India visit Nankana Sahib. Sikhs from all over the world come there too. 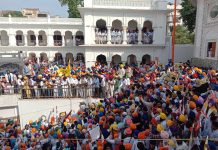 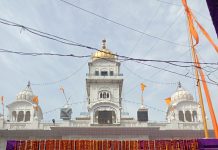