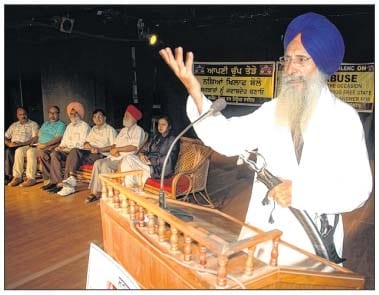 SRI GANGANAGAR, Rajasthan, India—S. Hardeep Singh Dibdiba, a senior Sikh leader from Rajasthan, is steadfast about his demands and has appealed to appointed Jathedar, Sri Akal Takht Sahib, to take action by July 16 to allow formation of separate Gurdwara committee for Rajasthan. While speaking to Sikh24 correspondent, S. Dibdiba said that if the Jathedar fails to take action, he would go on a hunger strike on July 17  for indefinite period.

S. Dibdiba held that Akal Takht Sahib is the most supreme body of the Sikhs and he was grieved by the fact that it’s Jathedars were losing reverence.  He said he will campaign to upkeep the superiority of Akal Takht Sahib and its hukamnamas.  He asked Akal Takht Sahib Jathedar to not give in to political pressure and approve separate Gurdwara committee.

He told Sikh24 that Rajasthan has a growing Sikh population, with a number of Gurdwaras, and it made sense for the community there to have its own management committe.

“I request Sikhs living Worldwide to contact the Jathedar Sahib, send him mail, SMS, and ask him what he is doing for Budha Johar?  Why is this decision been pending for past one year?” Said S. Hardeep Singh.  He further added, “A separate Gurdwara committee damages the monopoly of the Shiromani Akali Dal, and they tend to take decisions for non-Punjabi Sikhs without any consultation.”