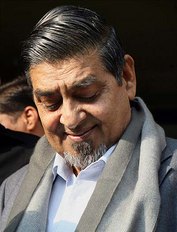 NEW DELHI—Congress leader Jagdish Tytler was issued summons by a Delhi court to respond to the allegations of defaming a lawyer fighting for the rights of several 1984 anti-Sikh [genocide] victims.

Additional Chief Metropolitan Magistrate (ACMM) Amit Bansal issued summons to Tytler, asking him to appear before his court on April 11 to respond to advocate H S Phoolka’s allegation of defaming him.

Phoolka alleged Tytler had made a derogatory remark against him in a news programme aired on a news channel on September 7, 2004. Phoolka said the “false and derogatory” allegations leveled by Tytler against him has harmed his reputation in society.

Reading out a portion of the complaint in the court, advocate Kamna Vohra, appearing for Phoolka, said Tytler should be prosecuted also for the alleged offence of criminal intimidation.

The counsel sought time to file an application for adding section 506 (criminal intimidation) of the IPC against the Congress leader.

The case against Tytler had been filed in a Ludhiana court in Punjab. It was transferred to Delhi by the Supreme Court later on Tytler’s plea.